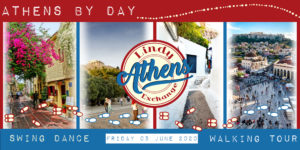 Let’s stroll around the city together and explore it!

Our first stop will be at Omonoia square, planned for the first urban plan of Athens, which was commissioned by King Otto in 1834. The drawings were realised by the architects Stamatis Kleanthis and Edward Saubert. It was originally named Palace square, as the royal palace was about to be built there, but when the plans were changed, the area was established as the end of the Athenian promenade. It was then renamed Othon Square in honor of the King, and finally, in 1862, in took its final name, Omonoia Square, which means Concord Square, as the two conflicting political factions’ reconciliation was celebrated there. Many important streets  of the city have their starting point at Omonoia square and head for Syntagma, the Acropolis or Pireus. 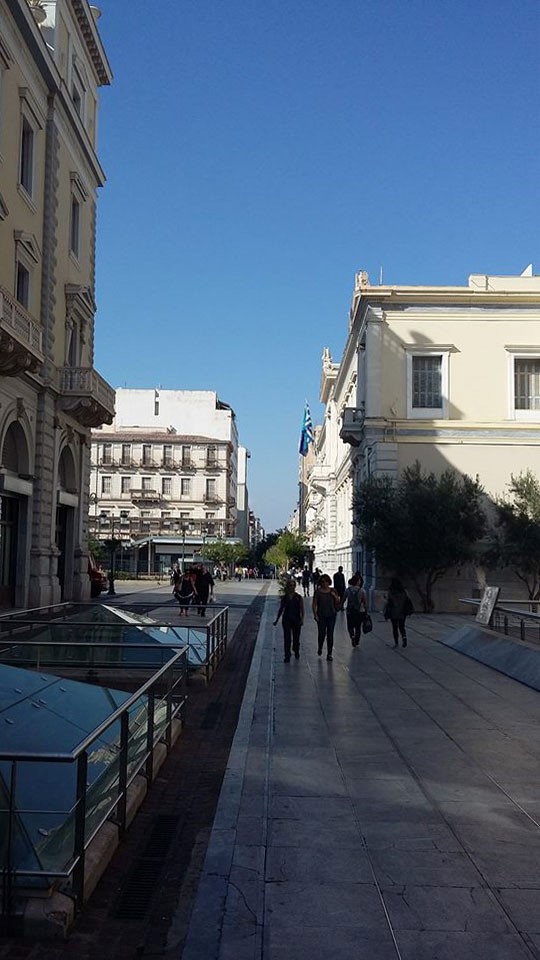 We are going to follow Aiolou street, that received its name from Aiolos, the God of the winds, according to the greek mythology. The street was designed in 1833 again by the architects Stamatis Kleanthis and Edward Saubert, and it was the first street that had been laid with gravel in Athens, in 1860. Neoclassical buildings were built, some of which are still present in the southern and central part of the road. However, since the 1950s, modern blocks of flats were constructed and the area began to dwindle commercially, since most of the shops were moved to Ermou, Stadiou and University streets. In 2003 during pedestrian projects, parts of the ancient Athenian fortification were discovered at the junction with Sophocleous Street.

We are going to cross Kotzia square or the official National Resistance Square sicnce 1977, to honor the resistance of the Greek people during the occupation (1941-1944),  the central square of Athens. It is located in the first municipal section of the city, on Athinas Street, opposite the Town Hall and within walking distance of the Varvakio Market. It owes its name to the mayor of Athens Konstantinos Kotzias. The area began to form in a square after 1850, with the original name of Loudovikos Square, by the name of Otto’s father. Around the square there are service and office buildings, such as the new headquarters of the National Bank of Greece, as well as historic buildings such as the Mela Megaron designed by Ziller, the Stavros Mansion (the old building where the National Bank is housed), etc. Nearby are the streets of Aeolou and Sofokleous, where the old building of the Athens Stock Exchange is located.

On the other side of the street, we meet one of the buildings of the National Bank of Greece, designed in collaboration with the Swiss Architect, Mario Botta, realised thoughout the years 1997 and 2002. The modern monumentality of the building with its robust internationalist style is in conscious contradiction with the classicist line of its historical surroundings. The architecture consists of a basic volume, parts of which are removed in such a way that the primary solid remains always clearly identified. The principle of symmetry in shaping the main face of Aiolou Street is the only common element of the adjacent neoclassical building of the Bank. The other two faces are treated as escape routes. Great emphasis was given to the color combination of the luxurious materials of the building: exterior and interior linings made of granite sand, dark gray granite flooring and light wood paneling on ceilings and walls. The porosity is divided into faces in horizontal zones so that, depending on the shades, it is more or less perceptible.

Varvakios Market, close to Kotzia square, is consedered the biggest municipal market of the City of Athens, which owes its name to the benefactor Ioannis Varvakis. It began to be built in 1878 and was completed with delay in 1886, after a fire broke out on August 1884. Since then, it has been operating incessantly. It is a unique building of an organized market where many food traders such as meat, poultry, seafood, agricultural products and more are housed. It constitutes a newer monument of a particular architecture, serving the basic needs of residents and visitors alike.

Where the first pharmacy in Athens once operated, the first big confectionery in the city was established. Today, it still makes amazing donuts with honey and cinnamon and homemade icecream. You can give it a try!

In 1839, at the intersection with Ermou Street, on the ground floor of Vryzakis’ house, the café “Nice Hellas” was founded, a center of political fermentation and concentration. It was also for some time the only place where foreign newspapers were sold.

We are about to cross Ermou street, currently the commercial zone in the heart of Athens, and also the street that connects Syntagma square with Monastiraki square. On our way to Plaka region, we meet the monument of the Airs, where Aiolou street ends. This ancient monument is located at the northern foothills of the Acropolis of Athens, at the site of the Roman Agora in Plaka. Its official name is the Curriculum of Cyrstus and it is believed that it was raised by Andronikus the Cyrristis. It is an octagonal marble building, without columns, where the eight main metamorphoses bear the eight main winds, hence the name “Airs”. It has two doors, one to the north and one to the west. 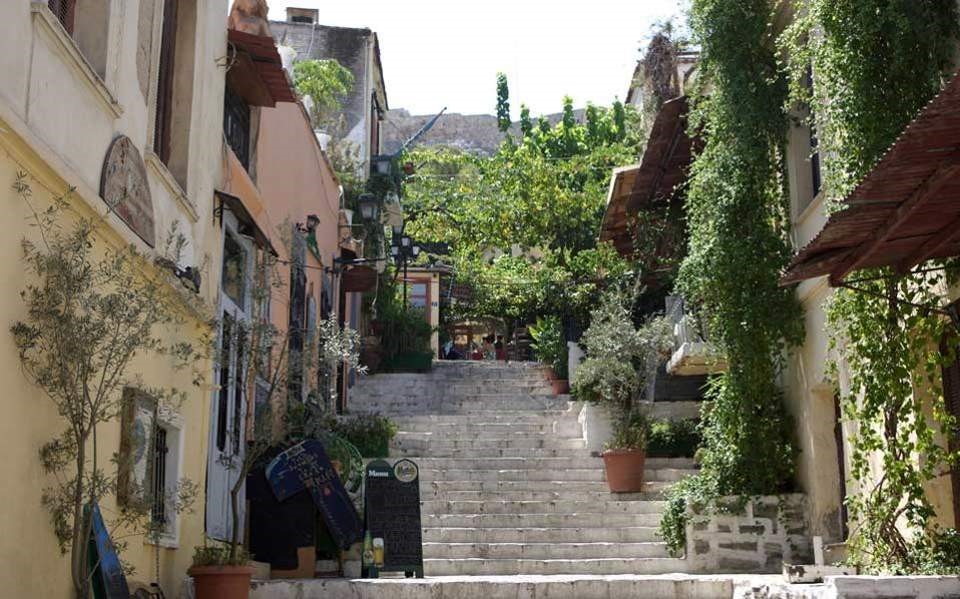 Plaka, developed mainly around the ruins of the Ancient Agora of Athens, in an area that was continuously inhabited since prehistory. The first well-known reference of ”Plaka” was realised by the French doctor Jacob Spon in his book, Spon’s Voyage d’Italie, Dalmatia, de Grèce et du Levant, published in 1678.  After the war, Plaka’s buildings were preserved as a whole, and Plaka was the only district in Athens that could see the city as it was 100 years ago, carrying many unsolicited data from its ancient, roman, byzantine, othoman, neoclassical and modern history. In the area there are museums, taverns, restaurants, cafes and tourist shops, while buildings of famous citizens of old Athens are preserved. During the years of Ottoman domination, Plaka as the most noble area was the Turkish quarter of Athens and the headquarters of Voivoda (governor). During the Revolution of 1821, Plaka, like the rest of Athens, was temporarily abandoned by its inhabitants due to the battles and the siege of the Acropolis that took place there in 1826. The area was rebuilt during the first years of King Otto’s rule. Plaka had a large Arvanite community until the end of the 19th century, which led some to refer to it as the “Arvanitian Quarter of Athens”. At the same time, Anfiotika, with traditional Cycladic architecture, was built near Plaka by settlers from the island of Anafi in the Aegean. In 1884, a fire caused by arson destroyed much of the neighborhood, giving archaeologists the opportunity to carry out excavations in the Roman Agora and Adrian’s library. Excavations continue in the area until today.

Dionysiou Areopagitou Street is a pedestrian street, adjacent to the southern slope of the Acropolis of Athens. It received its name from Dionysius Areopagitis, the first Athenian who embraced Christianity from the preaching of Apostle Paul, according to the Acts of the Apostles. The road runs from east to west. It starts from Vasilissis Amalias Avenue near Hadrian’s Gate and ends at the Hill of Philopappou, where it meets Apostolou Pavlou Street, the extension of the pedestrian path around the archaeological site of the Acropolis and the Agora. The road is about 830 meters long. The road was originally located in 1857 in a position to the north of its present, in front of the Herod Atticus Conservatory. It was redesigned and acquired its form in 1955 by the architect Dimitris Pikionis, who also designed the pedestrian paths of the archaeological site of the Acropolis. The street was realised in 2003.

The northern side of Dionysiou Areopagitou is empty, giving a view of the Acropolis archaeological site. Near the street is the entrance of the ancient theater of Dionysus. On the south side is the Acropolis Museum, designed by Bernard Tschumi Architects and first opened in 2009 . On the same side of the street there is a continuity of  facades, compiling a luxurious residential district with luxurious apartment blocks and mansions.

On the opposite side, is the entrance of the Conservatory of Herodes Atticus. It was built at a very fast pace at the expense of Herodes Atticus in the 2nd century AD, in honor of his wife, who died in 160 AD. The building’s purpose was mainly the musical events and for this reason it was called Conservatory. The need for its construction arose after the collapse of the Conservatory, which was built at the center of the ancient market of Athens by Augustus’ general, Agrippa, around 15 BC, and that in replacement of the still older Pericles Conservatory burned in 85 BC. The public space has 32 rows of marble stacks and its capacity was about 5,000 spectators. Like the theaters of the Roman era, the orchestra has a semicircular shape. The stage building was elevated to the depth of the stage and had three floors, two of which are still up to a height of 28 meters. The conservatory was housed with a wooden cedar roof. 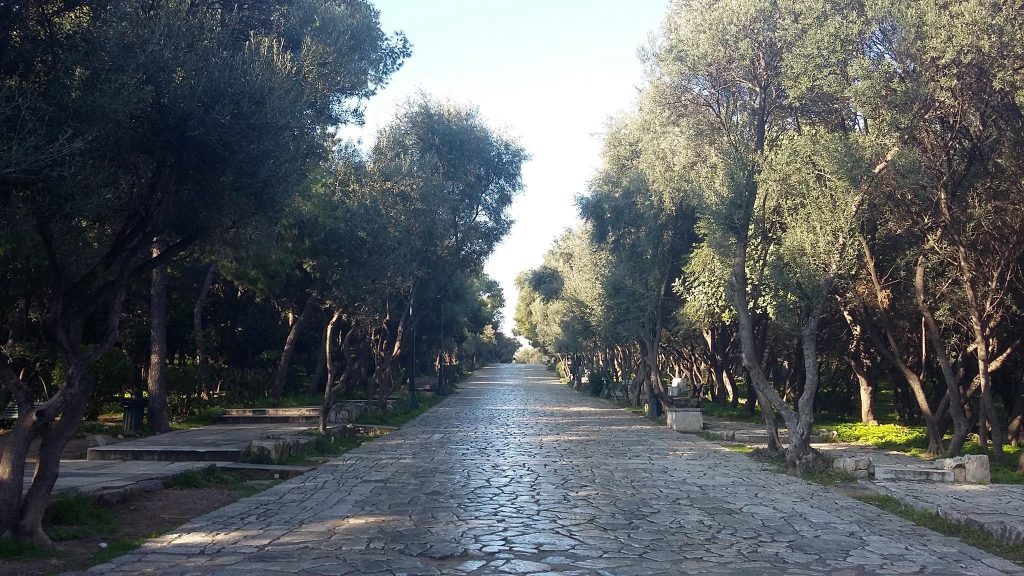 We will be then heading to Filopappou Hill, or Muses Hill. It is connected to the adjacent hills of the Observatory (Nymph Hill) and Pnyx. At its top there is the Philopappou monument built by Philopappos during the Roman period and gave it his name to the. Around the Philopappou Hill is the homonymous district as well as the districts of Koukaki, Petralona and the Acropolis. The oldest name “Senggo hill” dates back to the Frankish era, which was preserved until the beginning of the last century. The etymology of this name obviously comes from the Italian word “senius”, perhaps because in Frankish rule there was a kind of signpost station in the southern projection of the hilltop which received and transmitted signals and information with other towers observatories, along the coasts and islands of the Saronic Gulf, which mainly concerned the appearance of fleets or pirate ships.

In Filopappos Hill, the Architect Dimitris Pikionis designed a great landscape project for the people, in 1954, in order to enjoy their walk and connect their views to the Acropolis Hill. The project includes two main spiral paths, which start almost opposite the entrance of Dionysios Areopagitou and Apostle Paul. One climbs up the Acropolis hill to the shrine of Athena. The other is removed from him, creating two conditions of view: the first in Lambardiaris, where the main face of the Parthenon emerges for the first time, and a second one in Anderro, where the winding route ends. Throughout the work Pikionis used visual perception as a synthetic tool. A spatial system of visual engraving joins the landscape – more or less distantly – with its history. At the two viewing points, however, the engravings are particularly noticeable. In the configuration around St. John the Baptist, Dimitrios the joints of the flooring, when entering his open space, lead the look. In the semi-open area of the old café, the sloping roof turns towards the Acropolis. On the top of the hill, in Anderos, marble living rooms and small stone structures are organized to place people at the points with the best view of the Propylaea and the Acropolis in general. Interesting is also the way Pikionis captures the meaning of Nature. Nature is here interwoven with the history and the past of its culture. It incorporates human scriptures and remnants of an earlier habitation, so it does not stand out of them. Ancient monuments, buildings, rocks, shrubs like a landscape tell the story of Attica Earth.

Our last stop is going to be at Pnyka, the area where the Assembly of the Athenians, was convened, in Ancient Athens, from the 6th century until the end of the 4th century BC. It is situated in the middle north-south of the hillside opposite to and west of the Acropolis and between of the highest peaks of the Nymph Hill and  Philopappou Hill. Athens is just in front of your feet, enjoy!